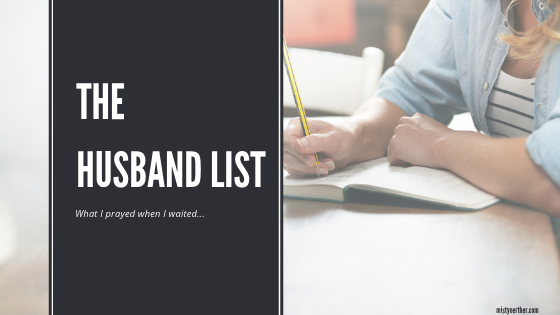 I was not the “pretty girl” growing up. Which means that boys were not really into me. I was the sort of funny, sort of annoying side-kick that all the pretty girls brought along so they could make out with boys while I played video games or shot pool with the boy sidekick. The forever wing-woman. This also means, that I was super into boys because everyone wants what they can’t have. You’d think that I wouldn’t care much about this, but I did. In fact I so much wanted to be in a relationship with a boy that it became kind of an obsession – not a specific boy, just the relationship part. In middle school and high school and well into college I searched for the “perfect relationship”. You know the rom-com kind where they don’t know they’re in love until BOOM they’re so in love and living happily ever after, because that’s real.

Girls, lemme tell you. It is not real. I know this because I searched hard for it in all the wrong ways.

In high school I went to a retreat where the boys were separated from the girls for just a bit (because high school hormones are in fact real) and the youth pastor’s lovely wife talked with us about a husband. I wish I could remember every single detail of that conversation but memory fails this 40-year-old brain so I reflect back on journals and notes and bits that I can recall. She talked with us about praying for a husband and my heart leaped out of my chest. “I should do this!” I thought, and I began a list that I would pray over on an off for the next decade.

I prayed over these things that I wanted in a husband, in a partner, and I added to the list in college as I grew in my faith and as an adult. There were moments when the Lord sent someone in my life as a teaser, I think to see if I was paying attention. Someone who had some of the qualities, but lacked many or was the opposite of a few. I think just to see if I’d fall into the trap, and once I did. Lesson learned with a broken heart and the blame fell on me. God stood firm in his love for me and never said “I told you so.”

I returned to the list and I prayed. At age 25, I met him. I met the man of not just my dreams, but the man of my prayers. God sent my husband and we spent two years forming a relationship with each other blessed by the Lord so that it would be unbreakable. We’ve been together for nearly 15 years, and married for 13 this fall. I am so thankful for all the wonderful qualities he brings to my life – I could go on an on about how he balances my weakness and strengthens my strengths. How he loves me unconditionally – and I assure you that is not an easy task. But mostly, I love how we nearly crossed paths a few times in our young 20s but just missed meeting sooner, because God’s timing is perfect and we had lessons to learn. So I returned and prayed and waited.

Answered prayers are the best.

I made a list of 5 things to start. Five things that I new would be most important. These are the deal-breakers so to speak. Mine were: beliefs/spiritual leader, stability, good with money, and passionate. Later I added things as I learned them: honesty, makes me laugh, enjoys travel, wants children, adoption (this later changed for both of us, and that’s ok!), likes sports.  One non-negotiable that I learned was he had to be in love with me – all of me. The good, the bad, and a the ugly.  I suggest you start with your deal breakers and take them to the Lord. Pray over them and ask him to reveal to you the desires of your heart as you add to your list, friend. I’m praying with you!

Once Upon a Time I was an Extrovert…I probably still am.